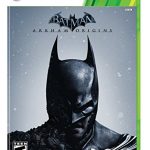 Add to cart
Rating:
Amazon Price: $19.99 $17.95 You save: $2.04 (10%) (as of March 20, 2020 10:20 am – Details). Product prices and availability are accurate as of the date/time indicated and are subject to change. Any price and availability information displayed on the Amazon site at the time of purchase will apply to the purchase of this product.

Face off against eight of the deadliest assassins in the DC Universe as they compete for a $50 million dollar prize on the Batman's head. Explore a vast Gotham, stop crimes in progress, solve mysteries, in search for a rogue hacker's blackmail data. Experience Batman's first encounters with some of his greatest allies and enemies. Equip the versatile remote claw and devastating shock gloves as you stalk the city streets and take down your enemies in exciting new ways. Play as Batman, Robin, or an elite member of Joker or Bane's gang.