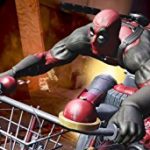 Add to cart
Rating:
Amazon Price: $19.99 $10.06 You save: $9.93 (50%) (as of March 11, 2020 4:30 am – Details). Product prices and availability are accurate as of the date/time indicated and are subject to change. Any price and availability information displayed on the Amazon site at the time of purchase will apply to the purchase of this product.

Some of you may know me as the Merc with the Mouth. And it’s time to get mouthy. Prepare to get Deadpooled – That’s right, $#*! just got real! Couple things I’d like to get off my chest: I’m a mercenary for hire with an accelerated healing factor. I like to run my mouth. Some say I’m unstable but I’m very stable. (Yep, totally stable) (What about that time we beat the dude with his own arms?) (That doesn’t count) And if you want to know what gets me going in the mornings, it’s chimichangas! (Mmmmm Chimichangas) WHOA, I feel better now. All right. I’m gonna battle for the safety of humans (and bewbs!) and mutants (and bewbs!)