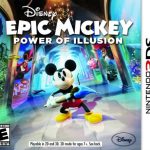 Add to cart
Rating:
Amazon Price: $44.99 (as of March 11, 2020 7:11 am – Details). Product prices and availability are accurate as of the date/time indicated and are subject to change. Any price and availability information displayed on the Amazon site at the time of purchase will apply to the purchase of this product.

Disney Epic Mickey: Power of Illusion is an Action-Adventure Platformer, exclusively for play on Nintendo 3DS. The game is a companion release to the simultaneously released Disney Epic Mickey 2: the Power of Two, and a nod to Sega's classic Illusion game series from the 1990's, that also featured Mickey Mouse. Features include a special interactive drawing and painting function, the core Disney Epic Mickey paint and thinner gameplay mechanic, Nintendo 3DS touchscreen functionality, familiar Disney villains and bosses, and Disney universe themed game levels and environments.

Wield the Power of the Brush with Your 3DS

Join Mickey and Oswald the Lucky Rabbit in an epic battle to save the magical world of Wasteland and change it forever. A castle ruled by a evil witch has appeared in the Wasteland. Within the castle, characters of the Disney universe, including the beloved Minnie Mouse, are in danger of disappearing forever.

In this side-scrolling gameworld, players must utilize both their platforming skills, and their paint and erase abilities to alter the world around them if they hope to save the world and their friends. The touchscreen of the 3DS allows for the tracing and illustration of a variety of objects. The best of renditions will allow objects to be used against enemies, while those less accurate could also be a hazard to all in-game, including Mickey and his friends.

Key Game Features Disney Epic Mickey: Power Of Illusion offers a special drawing and painting function that will allow players to create an interactive world by using the stylus to draw objects in the bottom screen that magically transform into classic Disney-style 2D illustrations. Utilizing the game's unparalleled dual screen integration, players will then move their creations to the top screen where they are further transformed into beautiful, fully realized objects that pop off the screen in stunning 3D. Players will utilize the core Disney Epic Mickey gameplay mechanic of paint and thinner while playing as Mickey Mouse in an attempt to save classic Disney Toon characters. Players will engage in epic boss battles with familiar Disney villains using attacks involving the power of illusions to surprise players. Players will adventure through game levels based on animated Disney films such as Peter Pan and Aladdin, as well as interact with beloved Disney characters. In between adventures, players can develop their own fortress by taking a small fort and expanding it into a thriving castle.