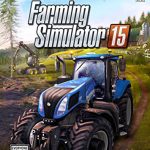 Add to cart
Rating:
Amazon Price: $34.87 (as of February 24, 2020 12:27 pm – Details). Product prices and availability are accurate as of the date/time indicated and are subject to change. Any price and availability information displayed on the Amazon site at the time of purchase will apply to the purchase of this product.

The Farming Simulator phenomenon is now on consoles! With a brand new graphics and physics engine, Farming Simulator 15 offers an immense open world, filled with incredible detail and stunning visual effects! Play solo on all consoles or with friends in multiplayer on PS4 and Xbox One! Develop and manage your own farm across hundreds of acres of land offered by the new Nordic environment, and a renovated North American farm. Use and drive authentic machines and farming tools, from over 40 most famous manufacturers, including vehicles for the new activity in Farming Simulator 15: woodcutting!