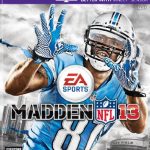 Add to cart
Rating:
Amazon Price: $29.99 $13.02 You save: $16.97 (57%) (as of March 11, 2020 6:32 am – Details). Product prices and availability are accurate as of the date/time indicated and are subject to change. Any price and availability information displayed on the Amazon site at the time of purchase will apply to the purchase of this product.

Madden NFL 13 is the 2012 release in Electronic Arts' celebrated American football video game release. Developed around the powerful, all-new Infinity game engine, Madden NFL 13 delivers a more engrossing, complete and realistic gridiron experience than any game before it. Key game features include: presentation reminiscent of national television broadcasts, gameplay improvements such as a new pass-ready system, improved play action, and the all-new read and react defensive AI system, optional Kinect sensor support,* Madden social/play functionality, multiplayer support online and offline, and the ability to build the ultimate franchise as a coach, an NFL superstar, or yourself.

With a completely redesigned passing game, including a new pass-ready system, improved play action, and the all-new read and react defensive AI system that features the most intelligent pass defense to date, Madden NFL 13 achieves greater realism on the virtual gridiron on both sides of the ball. In addition, Madden NFL 13 delivers physics you can feel. Powered by the all-new Infinity game engine, true player impact and authentic momentum transfer ensure that no two plays ever look or feel the same.

Tackle the most intelligent pass defense in a Madden game to date.
View larger

The all-new Infinity game engine provides physics that you can feel.
View larger

Multiplayer support both online and in local play allows you to always share the game with friends.
View larger

Live the NFL dream – whenever you want, wherever you want in a fully interactive, social, and connected online experience. Create your personal legacy or relive that of an all-time legend's as you build the ultimate franchise as a coach, an NFL superstar, or yourself. Manage your team from your console, the web, or mobile phone in a 24/7 world as NFL insiders and experts analyze, praise, and criticize every move along the way.

With Physics You Can Feel, Madden NFL 13 delivers Next Generation gameplay today. Powered by the all-new Infinity Engine, true player impact and authentic momentum transfer ensure that no two plays ever look or feel the same.

Control the line of scrimmage using just your voice. Both on defense and offense, Kinect on Xbox 360 gives you full control over all your pre-snap adjustments, audibles, and personnel, immersing you into the NFL like never before!

Stay connected and broadcast your football glory to all your friends with seamless Facebook and Twitter integration, including easy post-game status updates and Tweets.

Enjoy the drama of every aspect of NFL play with friends through multiplayer support, both online and offline. The Xbox 360 version of Madden NFL 13 supports 1-4 players locally, and 2-6 players online on Xbox LIVE.