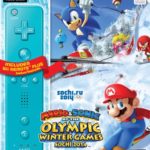 Add to cart
Rating:
Amazon Price: $133.93 $133.93 You save: (%) (as of March 10, 2020 8:48 pm – Details). Product prices and availability are accurate as of the date/time indicated and are subject to change. Any price and availability information displayed on the Amazon site at the time of purchase will apply to the purchase of this product.

Join your favorite characters, from Mario and Sonic to Princess Peach and Amy, as they team up and compete in the most exciting sports events at the Sochi 2014 Olympic Winter Games. Compete in 24 thrilling events including bobsleigh, skiing, figure skating pairs, and even snowboard slopestyle, which will make its Olympic debut in Sochi, Russia!

Feel closer to the action than ever before with the first entry in the Mario & Sonic series to utilize the Wii U GamePad and Wii Remote Plus controllers. In Biathlon, a cross country skiing/shooting hybrid, you’ll even use both as you switch controllers on-the-fly to earn the coveted Gold Medal. In addition, take on Snow Day Street Hockey, Rollercoaster Bobsleigh, and more supercharged Dream Events that combine familiar sports with outrageous settings, rulesets, and extreme action! And for the first time, head online* for global competition to help earn top scores for your home country! Let the games begin!

Key Features: Select from your favorite characters including Mario, Sonic, Luigi, Tails, Princess Peach, Amy, and more! Each character contains unique movements and stats Enjoy new events to the series like figure skating pairs and snowboard slopestyle, which will make its Olympic debut in Sochi, Russia Unique and intuitive controls bring you closer to the action. In bobsleigh, the captain of this four-player event tilts the Wii U GamePad controller like a steering wheel to guide the bobsleigh down the track while giving orders to teammates using Wii Remote Plus controllers Take part in supercharged Dream Events that take place in the worlds of Mario and Sonic and add surprising twists to familiar events Compete head-to-head in 4-player action or demonstrate your team spirit in cooperative gameplay For the first time, compete in online multiplayer events to help your home country earn the best ranking! Country rankings can be viewed in-game based on high scores, adding a fun element of global competition Enjoy depth and replayability through additional modes. In Legends Showdown, contenders from the worlds of Mario and Sonic join forces in a fierce tournament-style competition, while Action & Answer Tour lets you compete with friends in Olympic events with a quiz-style twist Returning events take advantage of the Wii Remote Plus controller and Wii U GamePad High definition visuals intensify the experience

HockeyChoose your teams as you go head to head in hockey with Mario & Sonic!

Ice skatingPair up with your favorite Nintendo character to compete in ice skating.