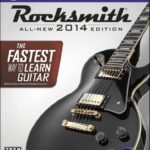 Add to cart
Rating:
Amazon Price: $71.99 (as of March 12, 2020 1:52 am – Details). Product prices and availability are accurate as of the date/time indicated and are subject to change. Any price and availability information displayed on the Amazon site at the time of purchase will apply to the purchase of this product.

Rocksmith 2014 Edition – Xbox 360 (Cable Included)
Rocksmith 2014 Edition X360 Rocksmith teaches you fast and effectively by letting you plug any real guitar or bass*. Rocksmith becomes your personal teacher as it monitors how you play, dynamically adjusts the difficulty to your skill level, then slowly introduces more notes and phrases until you're playing your favorite songs note-for-note. *Requires 1/4" output jack – cable included.
•A REIMAGINED EXPERIENCE Newly redesigned menus and in-game interfaces are now clear, smooth, and blazing fast. It's never been easier to play along and get feedback on your performance as you go.
•LEARN YOUR FAVORITE SONGS Select from over 50 hit tracks, ranging from alternative rock, to heavy metal, and more. You will learn to play your favorite songs, step-by-step and note-for-note, with tutorials along the way.
•DESIGNED FOR EASE AND SPEED A new fully-customizable Riff Repeater lets you select your section, difficulty, and speed on-the-fly. Master Mode has been revamped to make learning by memory more approachable.
•GET PLUGGED IN Rocksmith 2014 Edition is compatible with the original Rocksmith Real Tone Cable that plugs any real guitar** directly into Xbox 360, PS3, PC, or Mac. **Guitar requires standard 1/4" output jack.