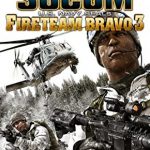 Add to cart
Rating:
Amazon Price: $23.08 (as of March 6, 2020 1:46 pm – Details). Product prices and availability are accurate as of the date/time indicated and are subject to change. Any price and availability information displayed on the Amazon site at the time of purchase will apply to the purchase of this product.

The third installment in the Fireteam Bravo series, SOCOM US Navy Seals Fireteam Bravo 3 is a third-person tactical shooter for PSP that drops the player, as leader of a four man squad of Navy Seals, in the middle of an internal conflict in a fictional, former Soviet republic. Featuring a brand-new story exclusive to the PSP, over 70 weapons and items, outstanding graphics and online multiplayer options including 16-player versus and 4-player co-op it is a worthy addition to the Fireteam Bravo series.

Multi option command system.
View larger.
Cinematic objective briefings.
View larger.
16-player multiplayer support, including 4-player co-op.
View larger.
Customizable weapons.
View larger. Story
In SOCOM US Navy Seals Fireteam Bravo 3 you lead your SEAL Fireteam in an action-packed special op hunt for weapons of mass destruction and an ex-KGB agent located in a fictional war-torn former Soviet republic. Alexander Gozorov is a man that does not want to be found, an ex-KGB agent with ties to the Russian Mafia, he has killed everyone we have sent to find him. Gozorov is believed to have information on a major imminent attack against western interests. Time is running out and your 4-man team of US Navy Seals is sent in to track him down.

Gameplay
As with any tactical shooter, Fireteam Bravo 3 is all about squad-based combat. In single player action the player is in charge of a four-man Navy SEAL team on a clandestine mission in the fictional Balkanized republic of Koratvia. Being that the Seals are interfering in an internal conflict on foreign soil, plausible deniability on the part of the US government is built into the storyline. This affects the way the game is played in that objectives and support, although clear and present, are not as heavily supported be intel, audio communications with superiors or extensive weaponry provided from the beginning of the game as in other games. Instead, briefings are provided through brief cinematics and most of the game's 70+ weapons and items can either be found, taken off enemies or purchased using "Command Equity" points, which as in the previous Fireteam Bravo game, are awarded for objective completion. In the end, what this means is that players will be flying by the seat of your pants more than in previous game releases, but also have more perceived freedom of play.

Fireteam Bravo 3 also features a number of new combat features. First, players have more choice in how they command. A full command option, where the precise actions of each member of the team against a common target is available, but they can also defer specific commands to perform coordinated attacks on different targets. The game also features an improved cover system that allows you to target and fire at enemies from behind cover, minimizing the damage that you take. You also have the ability to quick toss grenades, instead of having to focus your trajectory. Finally, Fireteam Bravo 3 also features a regenerating health system, allowing players to regain life if they can survive incoming fire and the visual fogginess that engulfs a wounded fireteam member..

Multiplayer Support and Modes
One of the areas where Fireteam Bravo 3 shines is in multiplayer. Players will enjoy 2-16 player wireless multiplayer game support, across eight game maps, both via ad hoc and infrastructure connections. Full four-player co-op is also available, with all the combat tactics available in single player campaign. Push-to-talk mic support is available for squad member communication, as well as replacement AI character availability if a player chooses to drop out of a co-op game. Along with Team Deathmatch and Demolition modes from earlier Fireteam Bravo releases, players also have access to new modes: Tug of War, where teams must hold specific positions to gather points; and Leader, in which a team member designated as leader is moved to a specific location while under enemy fire. The player who takes out this leader becomes the new leader, with his/her teammates taking on the role of protectors as the mode starts over.

Customization
Fireteam Bravo 3 allows for maximum customization, both in single player and multiplayer modes. In single player you are able to customize your weapons and those of your squad with a variety of accessories, including scopes, silencers and under barrel attachments. In multiplayer, customization is taken even further with the ability to choose from a variety of special forces, including the KSK, Korean 707, Australian SASR, as well as to create specific tags, uniform colors, etc. Player's friends lists from PlayStation Network can also be imported into the game so you know when and where friends are playing.

Key Game Features Continue the Action — An almost limitless combination of custom missions, gear, weapons and difficulty settings. Team Focused — Allows new ways for players to interact, expanding on the team orientated, authentic, military action that the SOCOM US Navy Seals Fireteam Bravo franchise is famous for. Lasting Appeal — Unlock gear and weapons, earn medals and ribbons as you complete objectives, either offline or by teaming up online. Compelling Story — Strong contemporary narrative supported by cutting edge presentation. Online Multiplayer — Engage in online versus fire fights of up to 16 players, as wells as 4-player co-op battles. Weapons — Enjoy access to over 70 weapons and items. Customization – Weapons can be customized for use in the game's 4 loadout slots, as can the three available squadmates available in single player mode.