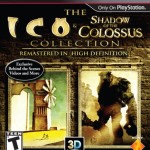 Add to cart
Rating:
Amazon Price: $19.99 $19.99 You save: (%) (as of December 15, 2015 10:22 pm – Details). Product prices and availability are accurate as of the date/time indicated and are subject to change. Any price and availability information displayed on the Amazon site at the time of purchase will apply to the purchase of this product.

Remastered in HD with full stereoscopic 3D support, the ICO and Shadow of the Colossus Collection brings together two of the most highly-acclaimed single player video games of all time into a single package, playable on PlayStation 3. Relive the magic and fall in love with these PlayStation 2 classics all over again, or discover the wonder of the two of gaming's most beloved games for the first time, now available in crisp HD resolution, 7.1 surround sound and fully stereoscopic 3D compatible. Additional features include: five exclusive behind the scenes bonus videos featuring the making of ICO and Shadow of the Colossus and a sneek peek at the upcoming Team Ico release, The Last Guardian; two dynamic XMB themes based on memorable scenes from ICO and Shadow of the Colossus; and Dualshock 3 wireless controller support.

Battle Colossi in Shadow of the Colossus.
View larger.

Enter a world of enchantment and wonder, where once was, is nevermore. Ico, a mysterious boy, has been expelled from his village to an isolated castle. Within his confines, he begins to have eerie dreams of rescuing a young princess from the evil spirits that dwell within the fortress. Blurring the lines between fantasy and reality, Ico embarks on a quest to save the princess and along the way, discovers his own cryptic fate.

Key Game Features Embark on a heroic quest in ICO, encountering mysterious obstacles and enchanted wonders within a forgotten world Explore more than 30 immersive levels within large, vibrant worlds Solve a variety of mind-bending puzzles and overcome the evil that resides within the castle Deep, involving storyline that will captivate you for hours

Shadow of the Colossus

Experience a majestic journey through ancient lands on your quest to bring a girl back to life by defeating sixteen gigantic beasts. On the back of your trusty horse, explore expansive landscapes and seek out each Colossus in its own place of hiding, armed with only your wits, a sword and a bow. Each one represents a unique challenge as you attempt to find its weakness and topple it.