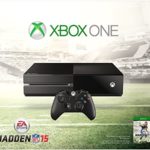 Add to cart
Rating:
Amazon Price: N/A (as of February 28, 2020 2:09 pm – Details). Product prices and availability are accurate as of the date/time indicated and are subject to change. Any price and availability information displayed on the Amazon site at the time of purchase will apply to the purchase of this product.

Introducing Xbox One. Where the best games, multiplayer, and your favorite movies, music, sports, and live TV come together in one place. Xbox One games look and feel incredibly real, with cinematic gameplay that rivals Hollywood. Watch TV or chat with friends on Skype while you play, and keep on playing while smarter matchmaking happens behind the scenes. With Xbox One, you can snap two things side-by-side on your TV, and switch from one to another instantly. Cloud-powered and built for the digital age, Xbox One is designed to keep getting better over time.*

Depending on the game or app, you can control Xbox One using voice commands and gestures, a controller, a remote control or your Xbox One SmartGlass device. It is designed to interact with you in multiple ways. (Kinect sold separately with $399 console.)

Your NFL on Xbox One.

With Xbox One, step into the huddle and experience the NFL in an all-new light—where you are at the center of your NFL world. With the NFL on Xbox One, stay connected to all the latest NFL news, video highlights and stories around-the-clock, and keep tabs on live stats and scores from around the league. Personalize your experience to follow all the latest from your favorite team, and with built-in NFL.com Fantasy Football you can even keep tabs on your Fantasy points in real-time while watching live TV broadcast games.**

All your NFL, all the time.

The NFL on Xbox One brings together the best of NFL.com, NFL Fantasy, and NFL Network all together on your TV in an integrated way. Get all the latest news from around the League, customize your highlights based on your favorite team, and track real-time scores and stats on Sunday.**

Fantasy Football on your TV.

NFL Fantasy Football comes to life on your TV with Xbox One, allowing you to manage your team and track your League in your living room like never before. Built-in NFL.com Fantasy allows you to set your lineup, watch highlights from your players or prospects, and even receive real-time scoring updates as you track your games on Sunday. Snap your Fantasy next to live TV or gaming and never miss a scoring update again.**

Personalized for your favorite team.

Personalize the My Team channel so that it follows all the stories, video highlights, stats, standings, and news from just your favorite team and its players. Watch all the highlights from over the weekend, or get ready for next week's game with tailored news segments and a curated Twitter feed. It's the best of your NFL team, all in one place on your TV.**