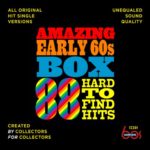 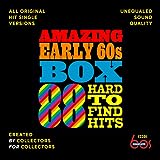 Add to cart
Rating:
Amazon Price: N/A (as of March 19, 2020 11:51 am – Details). Product prices and availability are accurate as of the date/time indicated and are subject to change. Any price and availability information displayed on the Amazon site at the time of purchase will apply to the purchase of this product.

Do you remember what it felt like to be a teenager in the early 1960s? I do. It was a wildly exciting time because everything seemed so new, especially the terrific music I heard on the radio and at the record shop. The music, like my life, was exuberant and positive. For me, the only thing that mattered was, did I like it? Did I feel it? And when I did, I wanted to hear it over and over, sometimes hundreds of times.

Rock and roll was young and innocent like I was, but it was going through its adolescence too. In a mere year or two the Beatles, the Rolling Stones and dozens of other British stars would change the feel of music forever. Yes, the early 60s was my favorite period in pop music.

As America transitioned from the Eisenhower era to the world of Camelot, artists such as Gene Pitney, Brian Hyland, Brenda Lee and Jay & The Americans were just getting started! Chart mainstays like Sam Cooke, Ray Charles, Bobby Darin and Paul Anka were riding high, and newcomers like Tony Orlando and Glen Campbell launched chart careers that would ultimately transcend the decade and extend well into the 1970s.

Sue Thompson, Anita Bryant, Bobby Rydell and Johnny Tillotson were at their hit-making zenith while stars like Pat Boone and Steve Lawrence made swan-song appearances. It was a fascinating period of diverse rock, pop, R&B, country and folk hits, and even some crazy novelties, all on the charts together. Sit back, strap in and get ready to enjoy a nearly 4-hour musical ride that can only be called ''AMAZING!''

Why ''amazing,'' you ask? First, this imported box of three CDs truly contains the most interesting songs you're ever likely to hear in such a set. Because we're collectors, we created everything in this box for other collectors. Even though 80 of the 88 songs here were Top 40 hits, most of them aren't the obvious tracks you'll find on other such collections.

And because collectors appreciate top sound quality, we assigned two of the best sound engineers anywhere to the project. They worked for months, paying close attention to all the details that matter: the best possible sources and EQ, correct fades and speed. Every song was compared to the original vinyl single to give you ONLY the original 45-rpm hit single versions in every case. Why take chances with risky, mediocre mp3 downloads of dubious originality?

Best of all, there are 25 CD debuts here, including SIGNIFICANT NEW STEREO DEBUTS on nearly a dozen great songs like ''Town Without Pity,'' ''Venus In Blue Jeans,'' ''Let The Little Girl Dance'' and ''Sealed With A Kiss,'' just to mention a few. We even included a few important mono debuts. Just try not to drool when reviewing all these in the song list below! Oh, I almost forgot the 10,000-word essay by Greg Adams with fascinating biographical details about every one of the 72 different artists who perform here.

In short, no expense has been spared, no detail overlooked, to bring you, the collector, the most AMAZING sound experience you'll ever hear from the great music of this seminal period in popular music. Simply a MUST for your collection! (NOTE: All songs are STEREO except those marked with an asterisk (*)