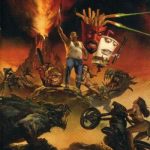 Add to cart
Rating:
Amazon Price: $29.98 $15.99 You save: $13.99 (47%) (as of March 20, 2020 11:56 am – Details). Product prices and availability are accurate as of the date/time indicated and are subject to change. Any price and availability information displayed on the Amazon site at the time of purchase will apply to the purchase of this product.

Fans of Cartoon Network’s Aqua Teen Hunger Force series (part of the cable channel’s Adult Swim programming) know what they’re in for with this feature-length extension of the nearly-indescribable animated show. Set in a rundown, Jersey suburb, Aqua Teen concerns the misadventures of three human-size characters who happen to be fast food refuse: the crude Master Shake, a discarded milkshake in a cup similar to those from McDonalds; skeptical Frylock, a flying, cardboard box of french fries; and the personable Meatwad, a piece of expired, red beef of unknown origin. Together, they go in search of a missing piece of an exercise machine that happens to be more than an exercise machine, placing them on a collision course with the likes of Oglethorpe and Emory, a pair of jagged, ridiculous creatures from the future who travel with a robot companion claiming to be the Ghost of Christmas Past. They also encounter Dr. Weird, a mad scientist given to disguises and who seeks revenge against the Hunger Force; McPee Pants, a rapping spider who wears a shower cap and diaper; and the hilarious Ignignokt and Err, two-dimensional villains from the ancient days of pokey, Atari video games. Dave Willis and Matt Maiellaro, series creators and writers-directors on Aqua Teen Hunger Force Colon Movie Film for Theaters, are wildly entertaining class clowns, but they expect the rest of us to follow them into their surreal world of postmodern animated nuttiness. The rewards, however, are plentiful. –Tom Keogh