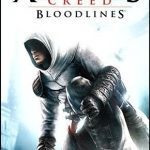 Add to cart
Rating:
Amazon Price: $26.99 (as of March 20, 2020 11:33 am – Details). Product prices and availability are accurate as of the date/time indicated and are subject to change. Any price and availability information displayed on the Amazon site at the time of purchase will apply to the purchase of this product.

Synopsis
In Assassin's Creed: Bloodlines, you'll take on the role of the daring Altair, striving to execute a mission against the Templars and honing your skills to become a Master Assassin. Run and climb anywhere you please in an expansive, open-world environment as you pursue your deadly aim.

Key Game Features: Sharpen your skills to become a Master Assassin in Assassin's Creed: Bloodlines as you pursue a deadly mission against the Templars Explore a stunning open – world environment in which you have free rein to run and climb Unlock exclusive material by connecting the PSP system to Assassin's Creed II on the PlayStation 3 system (Assassin's Creed II and PS3 not included) Dynamic Locomotion – Like the next-gen SKUs, Altair on the PSP reacts to the terrain fluidly, diving through holes and climbing ledges with only the creative application of the Free Run button. Tremendous Visuals – Altair and his environments are beautifully rendered to maximize the PSP’s visual capabilities