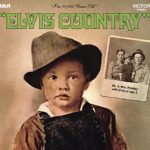 Add to cart
Rating:
Amazon Price: $14.74 $14.69 You save: $0.05 (%) (as of March 7, 2020 1:48 am – Details). Product prices and availability are accurate as of the date/time indicated and are subject to change. Any price and availability information displayed on the Amazon site at the time of purchase will apply to the purchase of this product.

In January 1971, Elvis was well and truly back and on top of his game. During 1970, he chalked up no less than 4 Platinum and 3 Gold album awards and 5 Gold singles. As if this sales achievement wasn't enough, on January 16, he was given the award as one of the "Top Ten Young Men of The Year" by the United States Jaycees. His new album Elvis Country released that same month received critical acclaim. In an outstanding review for Rolling Stone, biographer Peter Guralnick said: "… Elvis Presley has come out with a record which gives us some of the very finest and most affecting music since he first recorded for Sun almost 17 years ago."
Elvis Country is, obviously, a return to roots. But it's the singing, the passion and engagement most of all which mark this album as something truly exceptional. All the
familiar virtues are there. The intensity. That peculiar combination of hypertension and soul. There is even, for those who care to recall, a frenzied recollection of what the rock era once was, as Elvis takes on Jerry Lee Lewis' masterful "Whole Lot-ta Shakin' Goin' On" and comes out relatively unscathed. He has never sung better.

Elvis Country received an RIAA Gold certification and spent 21 weeks on the Billboard album chart. The single "I Really Don t Want To Know" c/w "There Goes My Everything" reached #9 and #21 on the Billboard country and pop charts respectively. The June 1971 follow-up studio album Love Letters From Elvis also contains songs recorded during the historic four-day Nashville session that spawned Elvis Country, including "Got My Mojo Working" and "Life" (Billboard #53).

This new 2-CD Legacy Edition features both these classic original albums plus 6 bonus tracks, including the full version of "I Was Born About Ten Thousand Years Ago," the studio jam "A Hundred Years From Now" and the single "Where Did They Go, Lord" c/w "Rags To Riches," which reached #33 on the Billboard chart.