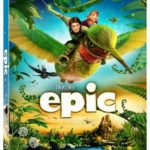 Add to cart
Rating:
Amazon Price: $9.97 $9.97 You save: (%) (as of March 10, 2020 11:44 pm – Details). Product prices and availability are accurate as of the date/time indicated and are subject to change. Any price and availability information displayed on the Amazon site at the time of purchase will apply to the purchase of this product.

Ronin
Ronin is the chisel-faced, battle-hardened leader of the Leafmen, the elite corps of warriors sworn to protect all life in the forest. He lives by the creed: “many leaves, one tree” and wouldn’t think twice about putting his own life on the line for someone he cares about. When the forest and his beloved Queen come under siege, Ronin rallies the Leafmen into action with his bravery and wry humor.

Bomba
A quirky, absent-minded professor, Bomba has grown out of touch with his now teenage daughter, MK. He lives in the middle of the forest, in a rundown house, where he surrounds himself with bizarre homemade gadgets. His life has been dedicated to – some would say obsessed with – studying –a civilization of tiny people he’s never seen. But when MK disappears, Bomba must put his own dreams under the microscope, and find what he’s really always been looking for.

Nod
Rakish and handsome, Nod is all about bucking the rules and flying solo. But his brazen individualism doesn't square with the Leafmen’s ideals of teamwork and unity, so he quits the squad. After a teenage girl enters his world – and when the stakes are high – Nod discovers what it takes to be a true hero.

Mary Katherine (MK)
Mary Katherine (she prefers “MK”) is a smart, spirited and headstrong 17-year-old who finds herself on the journey of a lifetime. After returning to her childhood home to connect with her estranged father, MK loses patience with his endless stories of the “tiny people” who live in the woods. But when she is magically transported into the Leafmen’s world, she gains a new perspective. To find her way home, MK must do more than believe in this world; she’ll have to help save it.

Mub & Grub
Low on the evolutionary food chain, but high in self-esteem, Mub, a self-characterized “ladies’ man,” and Grub, a wannabe Leafman, are the caretakers of the royal pod that will bloom into the future Queen or King of the forest. Though this slug-and-snail comedy duo is spineless, literally, they show real backbone by joining the quest to save their world.

Nim Galuu
At first glance, Nim Galuu is the consummate party animal. But don’t let this larger than life caterpillar fool you – his wisdom and practical know-how make him a key behind-the-scenes player in the epic battle to save the forest.

Queen Tara
Beautiful, agile and strong, Tara isn’t just the Leafmen’s Queen; she’s the life force of the forest, which she presides over with respect, compassion and humor. When Tara finds herself in danger, her unique connection with nature gives her powerful allies. And when all hope seems lost, she summons help from the most surprising of places.

Bufo
A tough-guy toad, Bufo is a wheeler and dealer who plays all the angles: he profits no matter which side wins or loses.

Mandrake
Gifted, or cursed, with the ability to bring destruction to anything he touches, Mandrake and his Boggan minions are the arch-nemeses of the Leafmen. Mandrake is tired of hiding in the shadows, and with his son by his side, he plans the ultimate revenge – to claim the forest he believes should have always been his.
Epic is a computer-animated adventure fantasy filled with gorgeous scenery, nice animated effects, plenty of action, and a somewhat familiar plot about the existence of a society of tiny people. Mary Katherine (Amanda Seyfried), or M.K. as she likes to be called, has recently come to live with her dad Bomba (Jason Sudeikis) in a ramshackle house in the middle of nowhere. Obsessed with proving the existence of a society of tiny guardians of the forest called Leafmen, who are responsible for maintaining balance by keeping the Boggans from spreading blight throughout the forest, M.K.'s dad has little time for a daughter or the realities of everyday life. A chance event lands M.K. right in the middle of the Leafmen's society, where she quickly develops a whole new appreciation for her father's eccentricities. She finds herself charged by the Leafmen's queen (Beyoncé Knowles) with a difficult task that will mean the difference between preservation and destruction for the forest. M.K. joins forces with an assortment of unlikely heroes, including slug and snail duo Mub and Grub (Aziz Ansari and Chris O'Dowd), overzealous Leafmen commander General Ronin (Colin Farrell), and Nod (Josh Hutcherson), a soldier with a bad habit of questioning authority. Their perilous journey introduces M.K. to a strange new breed of enemy and a whole new way of thinking. Loosely based on William Joyce's book The Leaf Men and the Brave Good Bugs, the film shares its premise–a society of tiny people tries to thrive without drawing the attention of the larger humans–with films like the Tinker Bell movies and The Secret World of Arrietty. What's unique about Epic is that it's just as much action film as fantasy. (Ages 7 and older) –Tami Horiuchi