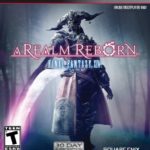 Add to cart
Rating:
Amazon Price: $7.91 $7.91 You save: (%) (as of February 26, 2020 11:14 pm – Details). Product prices and availability are accurate as of the date/time indicated and are subject to change. Any price and availability information displayed on the Amazon site at the time of purchase will apply to the purchase of this product.

18 powerful classes that can be changed on the fly.
View larger

Now Comes the Decline of the Seventh Umbral Era

The realm of Eorzea is ancient, with a conflicted history marked by cycles of prosperous "Astral," and disastrous "Umbral" eras. Past interpretations of this led many to predict that the current Astral Era would last into eternity, but now the land stands poised to enter another age of decline, a period known as the Seventh Umbral Era. On the eastern border, the Garlean Empire masses its troops for invasion, while the native beast tribes summon their deities, the otherworldly primals. The threats facing Eorzea will not easily be overcome, but overcome they must be.

Final Fantasy XIV: A Realm Reborn is a massively multiplayer online role-playing game (MMORPG) that invites players to explore the realm of Eorzea with friends from around the world. The PlayStation 3 release is an updated version of the PC game, Final Fantasy XIV, which was originally released in 2010. In it, classic Final Fantasy type themes and environments are merged with MMORPG play mechanics as you form a party and adventure with a multitude of players from across the globe. Forge friendships, mount chocobos, and board airships as you and your companions create your own unique stories in Eorzea. Set out alone or enlist the aid of friends as you undertake epic quests, battle familiar Final Fantasy monsters, and acquire unique abilities and equipment. All the classic elements from the series that you have come to know and love are waiting. Embark on the adventure of a lifetime to help reforge the fate of Eorzea.

Key Game Features All the hallmarks of the Final Fantasy franchise, including genre-leading graphics and high-definition real-time cutscenes that advance the game's rich storyline. Incredible new graphics engine that delivers a high level of detail and quality. A flexible class system that allows players to change to any of the eighteen different classes on the fly simply by changing their equipped weapon or tool. Guild-based activities focused on catering to players with different gaming styles Breathtaking musical score by renowned Final Fantasy series composer Nobuo Uematsu. Cross platform play on Playstation 3 and Windows PC and Robust gameplay features — such as Free Companies, story-driven player–vs-player content, and primal summoning — to bring players together.