↓
Home→DVD's→Movies→Sci Fi→Hammer Film Collection – 5 Movie Pack: The Two Faces of Dr. Jekyll, Scream of Fear, The Gorgon, Stop Me Before I Kill, The Curse of the Mummy’s Tomb 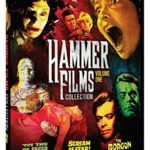 Add to cart
Rating:
Amazon Price: $8.76 $8.76 You save: (%) (as of March 9, 2020 12:21 pm – Details). Product prices and availability are accurate as of the date/time indicated and are subject to change. Any price and availability information displayed on the Amazon site at the time of purchase will apply to the purchase of this product.

Absorbed in research directed towards freeing the two natures of man, Dr. Jekyll degenerates in to Mr. Hyde, a vengeful maniac. While Hyde wants revenge against a gambler whom his wife is in love with, Dr. Jekyll, takes steps to do away with his evil self.

A young wheelchair-bound woman returns to her father's estate to find he's away on business, but she keeps seeing his dead body in various places. Her stepmother and other house guests employ a plan to drive her insane and take her inheritance.

In a rural village, a series of murders have been committed where each victim was turned into stone. A local professor investigates and finds an evil Gorgon haunting a nearby castle and in search of more victims.

After a horrific car crash, race car driver Alan Colby goes on vacation to recover, but suffers blackouts and violent outbursts. With his wife by his side, he visits a psychiatrist who promises to cure Alan's suffering but they have now encountered a mind more unbalanced and disturbed.

An American showman and financier disrupts the coffin of a mummified pharoah and finds it empty. The mummy has escaped to fulfill the dreadful prophesy and exact a violent and bloody revenge on all those who defiled his final resting place.