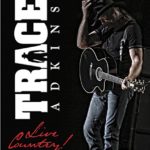 Add to cart
Rating:
Amazon Price: $14.98 $9.86 You save: $5.12 (34%) (as of March 3, 2020 2:32 pm – Details). Product prices and availability are accurate as of the date/time indicated and are subject to change. Any price and availability information displayed on the Amazon site at the time of purchase will apply to the purchase of this product.

Trace Adkins trademark baritone has powered countless hits to the top of the charts and sold over 10 million albums, cumulatively. Join Trace Adkins as he turns The Paramount in Huntington, NY into a downright honky tonk with a career spanning selection of his high-octane hits including 'You're Gonna Miss This', 'Ladies Love Country Boys', 'Songs About Me', 'Every Light In The House', 'Chrome', and 'Honky Tonk Badonkadonk'.

Trace Adkins won the very first all-star season of Donald Trump's Celebrity Apprentice, winning in the finals against Las Vegas magician Penn Jillette. He has also made several appearances on television, including the game shows Hollywood Squares and Pyramid, as the voice for recurring character Elvin on King of the Hill, and in television commercial voice-overs for the KFC fast food restaurant chain and the Firestone Tire and Rubber Company.