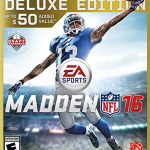 Add to cart
Rating:
Amazon Price: $29.99 $23.05 You save: $6.94 (23%) (as of March 7, 2020 2:15 am – Details). Product prices and availability are accurate as of the date/time indicated and are subject to change. Any price and availability information displayed on the Amazon site at the time of purchase will apply to the purchase of this product.

Be the playmaker with the Madden NFL 16 Deluxe Edition. With 36 Madden Ultimate Team Pro Packs including NFL super stars of the past and present and the pre-order exclusive Playmaker Pack, you’ve never been more equipped to challenge the competition this Madden Season! Lead your Ultimate Team or dynasty in Connected Franchise with new QB mechanics including body-relative throws and touch passes providing unprecedented depth and control while under center. Combined with a new risk/reward catch and pass-defend system, get ready for the biggest WOW moments in franchise history.

Deluxe Edition – Get 36 Madden Ultimate Team Pro Packs featuring NFL super stars of the past and present plus the pre-order exclusive Playmaker Pack. Pro Packs are granted 3 packs per week for 12 weeks starting on 9/1/15. Playmaker Pack is granted at code redemption, and will include a limited-time version of one of the Madden NFL 16 Playmakers!