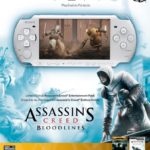 Add to cart
Rating:
Amazon Price: $889.99 (as of March 2, 2020 6:16 am – Details). Product prices and availability are accurate as of the date/time indicated and are subject to change. Any price and availability information displayed on the Amazon site at the time of purchase will apply to the purchase of this product.

"Angels & Demons" PlayStation Store Downloadable Movie Voucher
In Ron Howard's thrilling follow-up to The DA Vinci Code, expert symbologist Robert Langdon (Tom Hanks) follows ancient clues on a heart-racing hunt through Rome to find the four Cardinals kidnapped by the deadly secret society once thought to be little more than a myth, the Illuminati. With the Cardinals' lives on the line, and the Camerlengo, (Ewan McGregor) a sort of papal chamberlain, desperate for help, Langdon embarks on a nonstop, action-packed race through sealed crypts, dangerous catacombs, and eventually the most secretive vault on Earth.

Now with Included Microphone and Brighter Screen
The latest PlayStation Portable revision, the PSP-3000, has everything the older PSPs had but now includes a built-in microphone, which lets you take advantage of voice features in some games as well as the PSP's built-in Skype functionality without having to use a headset. The new PSP-3000 also includes an improved anti-reflective screen that offers higher contrast and clearer visibility in well-lit places and can even be used outdoors.

A Full Entertainment System in Your Hands
The PSP was designed to handle all varieties of applications and entertainment — music, video, communication, wireless networking, and, of course, gaming. Users will enjoy topnotch 3D games with high-quality, full-motion video, and high-fidelity audio. The 4.3-inch wide screen display is bright and beautiful, and works well under many different lighting conditions. If you prefer, you can also connect your PSP to your TV. The PSP utilizes the Universal Media Disc (UMD) for a storage medium, each of which holds 1.8 GB of data. It can also be used to download content digitally over the PlayStation Network.

Hundred of Games to Choose From
The PSP gaming library is hundreds of titles strong and covers a wide variety of genres. Whether you are seeking the hard hits of football, the strategy of a puzzle game, or anything in-between there's sure to be many games for you. The PSP is capable of graphics quality that is comparable to the PlayStation 2, but in a pocket-sized package that you can take wherever you go.

Listen to Your Music Collection Anywhere
With the ability to play MP3, WAV, WMA, ATRAC3+, and MP4 files, you can easily use your PSP as an audio player. Simply place your music on a Memory Stick Duo, and you can navigate your collection using the PSP's XMB (XrossMediaBar) to select your song to play.

Show and Share Photos With Your Friends
With the PSP, you can show a slideshow of your photo collection with your friends by simply placing them on a Memory Stick Duo and accessing them via PSP's XMB. Additionally, you can beam photos wirelessly to friends who also have a PSP via the devices ad hoc wireless connection.

Built-in WiFi allows for Internet Browsing and Online Gaming
With built-in Wi-Fi, you can access the Internet from any accessible hotspot. Once connected, you can surf the Web and download exclusive demos and content for your PSP from the PlayStation Store. The Wi-Fi also allows you to battle other gamers, both over the Internet and in your local vicinity (ad-hoc).