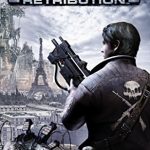 Add to cart
Rating:
Amazon Price: $19.99 $15.00 You save: $4.99 (25%) (as of March 19, 2020 3:59 am – Details). Product prices and availability are accurate as of the date/time indicated and are subject to change. Any price and availability information displayed on the Amazon site at the time of purchase will apply to the purchase of this product.

Set in the weeks after Resistance: Fall of Man, Resistance: Retribution follows the story of former British Marine, James Grayson. After a personal tragedy ¿ he is forced to kill his own brother inside a Chimeran conversion center ¿ Grayson goes on a vendetta to destroy every conversion center he can find. Eventually Grayson learns that his efforts have been futile… in Western Europe the Chimera have evolved a new method of converting humans. The European resistance ¿ the Maquis ¿ enlist Grayson's help, and he joins Cartwright and Parker in Operation Overstrike. The war to retake the European continent has begun.