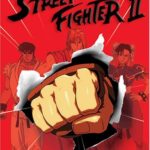 Add to cart
Rating:
Amazon Price: N/A (as of March 11, 2020 9:59 am – Details). Product prices and availability are accurate as of the date/time indicated and are subject to change. Any price and availability information displayed on the Amazon site at the time of purchase will apply to the purchase of this product.

All the lightning-fisted thrills of the world’s wildest combat video game series explodes onto DVD in this brilliantly animated, sensationally supercharged adventure, Street FighterTM II: The Animated Movie. This all new unedited and uncensored version now boasts a stunning new 5.1 surround sound mix of the equally popular soundtrack. In the not too distant future, civilization is under attack. Leading the forces of darkness is the evil mastermind Bison, who is determined to capture the minds and bodies of the world’s greatest fighters for use in his manic plan to conquer the world. The only people on Earth with the potential to stop him are Ken and Ryu, two powerful legendary martial arts warriors. Together they face the fights of all fights. The final battle of good against evil is about to begin!