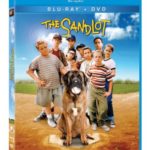 Add to cart
Rating:
Amazon Price: $19.96 (as of March 19, 2020 3:18 pm – Details). Product prices and availability are accurate as of the date/time indicated and are subject to change. Any price and availability information displayed on the Amazon site at the time of purchase will apply to the purchase of this product.

You'll have a ball with the 20th Anniversary Edition of The Sandlot featuring a complete set of 10 collectible trading cards created exclusively for this release! When fifth-grader Scotty Smalls moves to a new town with his folks, he strikes out with the neighborhood kids, because he can't even throw a baseball until the leader of the local sandlot team shows him the ropes. It's the beginning of a magical summer of wild adventures, first kisses, hilarious hijinks and fearsome confrontations with the dreaded 'beast' that lives behind the left field fence. Co-starring Karen Allen, Denis Leary and James Earl Jones, The Sandlot has major-league laughs for all ages!