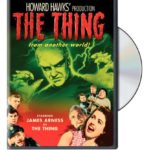 Add to cart
Rating:
Amazon Price: $9.99 $9.99 You save: (%) (as of March 20, 2020 8:51 am – Details). Product prices and availability are accurate as of the date/time indicated and are subject to change. Any price and availability information displayed on the Amazon site at the time of purchase will apply to the purchase of this product.

A UFO crashes near an isolated military base in the far Arctic.Scientists recover the craft's now-frozen alien pilot and take it back to their base. While debating whether to study the alien, try to communicate with it or kill it, the pilot awakens–and the scientists' question of if it is friend or foe is quickly answered.Now, trapped in a frozen wasteland with an unstoppable, nonhuman creature that sees them as prey, the small band of scientists come face to face with The Thing.]]>