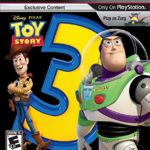 Add to cart
Rating:
Amazon Price: $56.99 (as of October 10, 2019 11:02 am – Details). Product prices and availability are accurate as of the date/time indicated and are subject to change. Any price and availability information displayed on the Amazon site at the time of purchase will apply to the purchase of this product.

The creators of the beloved “Toy Story” films re-open the toy box and bring movie goers back to the delightful world of our favorite gang of toy characters in “Toy Story 3”. As Andy prepares to depart for college, Buzz, Woody and the rest of his loyal toys are troubled about their uncertain future. Directed by Lee Unkrich (co-director of “Toy Story 2” and “Finding Nemo”), “Toy Story 3” is a comical new adventure in Disney Digital 3D that lands the toys in a room full of untamed tots who can’t wait to get their sticky little fingers on these “new” toys. It’s pandemonium as they try to stay together, ensuring “no toy gets left behind.” Pixar veteran Darla K. Anderson ("Cars" and "Monsters, Inc.") produces, while Michael Arndt, Academy Award-winning screenwriter of "Little Miss Sunshine," brings his unique talents and comedic sensibilities. In the Toy Story 3: The Video Game help Buzz, Woody and the rest of the Toys ensure no toy gets left behind. Dive into to all new heroic adventures in Story Mode or let your imagination run wild in the exiting new open world of Toy Box Mode! Come and play to infinity…and beyond.