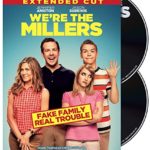 Add to cart
Rating:
Amazon Price: $19.94 (as of March 11, 2020 2:43 pm – Details). Product prices and availability are accurate as of the date/time indicated and are subject to change. Any price and availability information displayed on the Amazon site at the time of purchase will apply to the purchase of this product.

After being robbed of a week's take, small-time pot dealer David is forced by his boss to go to Mexico to pick up a load of marijuana. In order to improve his odds of making it past the border, David asks the broke stripper Rose and two local teenagers to join him and pretend they're on a family holiday. Jennifer Aniston and Jason Sudeikis star in the comedy movie from Warner Home Video. We're The Millers is available on DVD and ultraviolet digital in this 2-disc set.