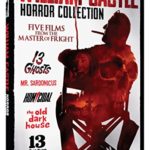 Add to cart
Rating:
Amazon Price: $8.96 $8.96 You save: (%) (as of March 11, 2020 8:43 pm – Details). Product prices and availability are accurate as of the date/time indicated and are subject to change. Any price and availability information displayed on the Amazon site at the time of purchase will apply to the purchase of this product.

Iconic horror director William Castle created a simple, but winning formula for his films: a little comedy, a lot of scares, a preposterous gimmick, and a clear sense that fright films should be fun. This even meant Castle would, like Alfred Hitchcock, appear in his trailers and even the movies themselves.

Though his career spanned 35 years and included everything from westerns to crime thrillers, he'll always be remembered for his horror films from the late 50s to the mid-60s. Enjoy 5 of his spine-tingling classics!

When an eccentric uncle wills a huge, ramshackle house to his impoverished family, they get the shock of a lifetime. Their new residence comes complete with a spooky housekeeper, plus a fortune in buried treasure and 12 horrifying ghosts.

The girls of a Swiss boarding school have one thing in common they are all daughters of diplomats. One in particular finds out that she has a knack for espionage, and uncovers the murder of a Russian diplomat. Now she must escape using her girlish wiles.

Desperate to retrieve a winning lottery ticket, a greedy man unearths his father's corpse. An enormous jackpot is his reward, but not without a price: his face is frozen permanently into a hideous grin. He enlists his one-eyed servant to help him lift the curse.

In the small town of Solvang, there's a killer on the loose and the nurse taking care of a wheelchair bound stroke victim has a bedside manner is to die for. As the truth is uncovered, a town's most chilling mystery will be revealed… and a family's darkest secret.

An American car salesman living in London, is invited to spend the weekend at the Femm Estate. The Femms, trapped in the house due to an ancestor's will, live in fear as they are taken out one at a time. Tom is left to figure out who the killer is before he becomes a victim himself!