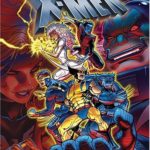 Add to cart
Rating:
Amazon Price: $11.99 $11.99 You save: (%) (as of March 6, 2020 3:20 pm – Details). Product prices and availability are accurate as of the date/time indicated and are subject to change. Any price and availability information displayed on the Amazon site at the time of purchase will apply to the purchase of this product.

The saga of the Dark Phoenix–in which Jean Gray is possessed by a powerful and destructive cosmic being–is the centerpiece of X-Men, Volume 3, which compiles the conclusion of the third season of 1990s animated series X-Men and the beginning of its fourth. The story line, which unspools over 4 of the double-disc set's 15 episodes, largely echoes the one outlined by Chris Claremont, John Byrne, and Dave Cockrum in the print version circa 1976-77, with Gray/Dark Phoenix installed as the Black Queen of the Hellfire Club's Inner Circle, her destruction of the D'Bari star system, and the X-Men's fight against the fearsome Shi'ar Imperial Guard to decide the Phoenix's fate. It's a thrilling quartet of episodes, and the highlight of the set; other story arcs include Wolverine's never-ending quest for the facts of his past ("Weapon X, Lies and Videotape"); Morph's return to the X-Men, which is dampened by an attack by the Sentinels ("Courage"); appearances by Nightcrawler, Iceman ("Cold Comfort"), and Archangel ("Obsession"), who recruits Rogue to battle Apocalypse; and a nice nod to the Age of Apocalypse story line in the two-parter "One Man's Worth." Those who remember the TV series will be pleased to have this current go-round of episodes, despite their being out of broadcast order (which results in some continuity confusion); newcomers will appreciate the plentiful action and smart scripting. As with previous Buena Vista X-Men releases, no extras are included in the set. –Paul Gaita