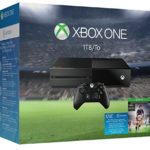 Add to cart
Rating:
Amazon Price: $190.00 $190.00 You save: (%) (as of March 6, 2020 2:06 pm – Details). Product prices and availability are accurate as of the date/time indicated and are subject to change. Any price and availability information displayed on the Amazon site at the time of purchase will apply to the purchase of this product.

Own the Xbox One 1TB EA Sports FIFA 16 Bundle, featuring a full-game download of FIFA 16, three FIFA Ultimate Team Loan Legends, and one year of EA Access. Experience improved gameplay across the pitch in FIFA 16, with more ways than ever to create moments of magic. Play FIFA 16 and other upcoming EA games on Xbox One for a limited time before they're released as an EA Access member, and get access to The Vault, where you can play a growing collection of EA's best Xbox One games worth over $400. Quickly switch back-and-forth between your games, live TV, and apps like Netflix and HBO GO. It's time to jump ahead with Xbox One. Advanced TV hardware required. Initial set-up, updates, and some games and features require broadband internet and/or Kinect for Xbox One. Some apps require app provider-specific subscriptions and/or other requirements. FIFA 16 code and FIFA Ultimate Team Legends token inside; Game download from Xbox Live and requires up to 20GB. Loan Legends will be randomly selected and only available for play in five games. FIFA 16 available to play beginning September 22, 2015. ISP fees apply. Online multiplayer requires Xbox Live Gold membership (sold separately). After complimentary year, EA Access requires paid subscription, sold separately. Xbox Live Gold (sold separately) also required to access certain Vault title online features. Conditions and restrictions apply.