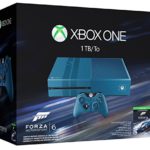 Add to cart
Rating:
Amazon Price: $349.99 (as of March 11, 2020 6:34 am – Details). Product prices and availability are accurate as of the date/time indicated and are subject to change. Any price and availability information displayed on the Amazon site at the time of purchase will apply to the purchase of this product.

The Xbox One “Forza Motorsport 6” Limited Edition Console is a celebration of the 10th anniversary of the critically-acclaimed “Forza Motorsport” racing simulation franchise and the community that has gone along for the ride. As part of an ongoing collaboration with Ford Motor Company, the console was announced at the Further with Ford media event in San Francisco on June 23. The console reflects Xbox and Forza game developer Turn 10 Studios’ continued work to bring gaming and racing enthusiasts closer than ever. Featuring a racing-inspired design that combines iconic sports car styling with custom automotive sound effects, the “Forza Motorsport 6” Limited Edition Console is the first custom console from Xbox with a racing theme. The bundle includes a 1TB hard drive, matching wireless controller with rubberized diamond grips, and digital copy of the most beautiful and comprehensive racing game this generation. The all-new Ford GT supercar is the hero car of “Forza Motorsport 6.” The game delivers the highly realistic experience of driving ultra-high-performance cars like the Ford GT on tracks from 26 world-famous locales to fans around the globe. Celebrate this thrilling world with an all-new 70+ hour career mode and epic 24-car multiplayer races. Among more than 450 cars, this next iteration of the series includes Ford Performance vehicles like the Shelby GT350 Mustang and the F-150 Raptor, one of the most popular vehicles in previous versions of “Forza Motorsport.”