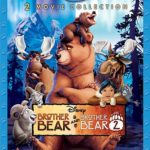 Add to cart
Rating:
Amazon Price: $9.96 $9.96 You save: (%) (as of March 18, 2020 1:52 pm – Details). Product prices and availability are accurate as of the date/time indicated and are subject to change. Any price and availability information displayed on the Amazon site at the time of purchase will apply to the purchase of this product.

Disney proudly presents two heartwarming and hilarious movies in one incredible collection — BROTHER BEAR, the 2003 Academy Award(R) nominee for Best Animated Feature, and BROTHER BEAR 2 — together for the first time on Blu-ray. Bring home an entire forest full of fun, complete with digitally restored high definition picture and sound. After an impulsive boy named Kenai is magically transformed into a bear, he and his little brother bear, Koda, take a courageous (and often hilarious) journey to see the Northern Lights. Experience the excitement of these two fantastic films like never before on Disney Blu-ray! Brother Bear utilizes two aspect ratios. The film opens in 1.85:1, then transitions into 2.35:1.