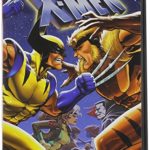 Add to cart
Rating:
Amazon Price: $39.64 (as of November 18, 2018 2:26 am – Details). Product prices and availability are accurate as of the date/time indicated and are subject to change. Any price and availability information displayed on the Amazon site at the time of purchase will apply to the purchase of this product.

A pair of potent multi-episode stories–the tragic tale of supermutant Proteus, and Apocalypse's world-shattering scheme to attain godhood–are the cornerstone of this double-disc set, which compiles most of the fourth season of the 1990s X-Men animated series. The Proteus two-fer, adapted from the 1979-80 story line in Uncanny X-Men, concerns a superbeing with powers of possession and reality alteration who escapes confinement at the Muir Island Research Centre (where he'd been placed by his mother, Moira McTaggart) to search for his father, who rejected him at birth. It's a fairly moving story that hews closely to the print version (Proteus is less lethal here, and the meeting between father and son has a milder ending) and should please X-Men fans who value accurate depictions of the canon. The Apocalypse arc, which unspools over four episodes, is more complex: "Beyond Good and Evil" has the archvillain kidnapping psychics–including Jean Grey and Professor Xavier–to unleash a wave of mental energy that will destroy the world so that he can rebuild it in his image. The scope of the story is fairly impressive (it was originally intended as the conclusion of the series) and satisfies both the action and speculative-fiction elements that make the X-Men such an enduringly popular series. A second two-parter on disc 1, "Sanctuary" (based loosely on the "Fatal Attractions" arc from 1993), finds Magneto securing a permanent home for mutants on Asteroid M, but running afoul of Fabian Cortez and his Acolytes.

Volume 4's second disc is a grab bag of assorted single-story episodes, some good ("The Lotus and the Steel," which nicely encompasses Wolverine's travels to Japan; "Family Ties," in which Magneto is revealed to be the father of Quicksilver and the Scarlet Witch), others less so ("Have Yourself a Morlock Little X-Mas," in which the subterranean Morlocks seek Wolverine, Jubilee, and Storm to aid an ailing Leech). Unfortunately, these are presented out of broadcast order (as is the case with the other Marvel/Disney X-Men discs), which may prove somewhat aggravating for those looking for a complete-season set. Also irksome is the continued lack of special features, though the image quality of the episodes is solid. –Paul Gaita