↓
Home→Music→Oldies→Frankie Valli And The Four Seasons: Live In Concert 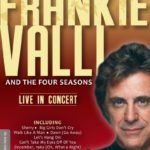 Add to cart
Rating:
Amazon Price: $14.98 $10.84 You save: $4.14 (28%) (as of March 20, 2020 9:41 am – Details). Product prices and availability are accurate as of the date/time indicated and are subject to change. Any price and availability information displayed on the Amazon site at the time of purchase will apply to the purchase of this product.

One of the most outstandingly successful groups in pop history, Frankie Valli and the Four Seasons were always known for their extraordinary live performances. This live concert was filmed in Atlantic City during their 1992 US tour. Including many of their most popular and widely acclaimed hits, the program is a fitting tribute to a remarkable group. Inducted into both the Rock 'n Roll Hall of Fame and the Vocal Group Hall of Fame, Frankie Valli has scored 39 Top 40 hits in the course of his illustrious career.

In 2005, the Broadway musical Jersey Boys opened on the 'Great White Way'. Besides performances of many of Frankie Valli and The Four Seasons hit recordings, the musical features a biographical narrative, told as four separate points of view by each of the members of The Four Seasons (Tommy DeVito, Frankie Valli, Nick Massi, and Bob Gaudio). The musical dramatizes several real-life incidents from Valli's life, including his estrangement from his daughter Francine, who died in 1980.

The widely acclaimed show has won six Tony awards, with touring companies around the world, as well as a version at Paris Las Vegas. Based on the roadway smash hit and directed by Clint Eastwood, the movie Jersey Boys was released in 2014 to rave reviews, starring Christopher Walken and John Lloyd Young as Valli.