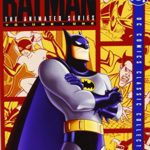 Add to cart
Rating:
Amazon Price: $26.24 (as of March 6, 2020 10:38 am – Details). Product prices and availability are accurate as of the date/time indicated and are subject to change. Any price and availability information displayed on the Amazon site at the time of purchase will apply to the purchase of this product.

Warner Brothers' Batman: The Animated Series (1992-1995) remains a striking, stylized program that helped to revitalize the familiar comic book hero. Drawing on such diverse influences as Frank Miller's graphic novel The Dark Knight Returns, the Fleischers' Superman cartoons of the early '40s, and contemporary Japanese animation, the filmmakers stress interesting designs and cinematography. The Caped Crusader prowls a sinister, Art Deco-styled world of tall verticals, sharp angles, silhouettes, searchlights, and grid-like shadows cast by window frames. Its visual pizzazz eclipses Filmation's pallid kidvid, The Batman/Superman Hour (CBS, 1968), which ran off and on in various incarnations through 1981. Many of the same artists worked on the Batman animated features (e.g., Mask of the Phantasm (1993), Batman Beyond–The Movie (1999)), which display similar strengths and weaknesses.

Ironically, Batman: The Animated Series looks better in stills than it does in motion. The artists fail to stylize the movements of the characters to match the dramatic settings, as Genndy Tartakovsky and his crew did in Samurai Jack. Batman uses sophisticated computers to combat the well-known villains–the Joker, the Penguin, Mr. Freeze, Catwoman–as well as some less celebrated baddies: Manbat, Clayface, The Mad Hatter. The bad guys cram a lot of plotting and scheming into each 22-minute episode, but the violence is kept to a broadcast standards minimum.

The Dark Knight's First Knight easily ranks as the most interesting of the extras. Producers Bruce Timm and Eric Radomski recount the genesis of the series, and show their mini-pilot, which is more violent and more fully animated. If the complete episodes had matched the pilot, the series would have been much more exciting. (Unrated, suitable for ages 8 and older: violence, mild grotesque imagery) –Charles Solomon