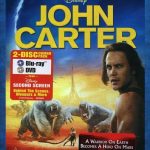 Add to cart
Rating:
Amazon Price: $12.69 $12.69 You save: (%) (as of March 11, 2020 2:26 pm – Details). Product prices and availability are accurate as of the date/time indicated and are subject to change. Any price and availability information displayed on the Amazon site at the time of purchase will apply to the purchase of this product.

From Academy Award(R)-winning filmmaker Andrew Stanton (Best Animated Film, Wall-E, 2008) comes John Carter — a sweeping action-adventure set on the mysterious and exotic planet of Barsoom (Mars). Based on Edgar Rice Burroughs's classic novel, John Carter is a war-weary, former military captain who's inexplicably transported to Mars and reluctantly becomes embroiled in an epic conflict. It's a world on the brink of collapse, and Carter rediscovers his humanity when he realizes the survival of Barsoom and its people rests in his hands. Stunning special effects, great characters and villains — and complete with extraordinary bonus features — John Carter is a heroic and inspirational adventure that will thrill you beyond imagination.