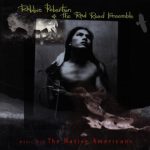 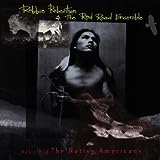 Add to cart
Rating:
Amazon Price: $12.92 (as of March 19, 2020 11:49 am – Details). Product prices and availability are accurate as of the date/time indicated and are subject to change. Any price and availability information displayed on the Amazon site at the time of purchase will apply to the purchase of this product.

Commissioned to come up with a soundtrack for the 1994 Turner Network Television special The Native Americans, Robbie Robertson delivered some of his most haunting and evocative work to date. Combining the sleek atmospherics of 1991's Storyville with traditional tribal chanting and instrumentation, Music for the Native Americans often manages to sound both contemporary and timeless. Unfortunately, Robertson's lyrics are often as clunky as they are well intentioned–though brief, his liner notes are far more powerful and informative–and his gravelly speak-singing is consistently outclassed by Native American guest vocalists Pura Fe, Soni, and Jen, whose "Mahk Jchi (Heartbeat Drum Song)" is also the album's highlight. File under "flawed but interesting." –Dan Epstein