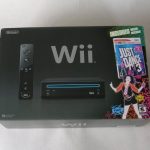 Add to cart
Rating:
Amazon Price: N/A (as of March 5, 2020 5:50 pm – Details). Product prices and availability are accurate as of the date/time indicated and are subject to change. Any price and availability information displayed on the Amazon site at the time of purchase will apply to the purchase of this product.

Includes Black Wii Console, Black Wii Remote Plus, Black Nunchuk and Just Dance 3 game. Just Dance is back and the party is bigger than ever before. The new Just Dance 3 gives a new twist to the already spontaneous and outrageous dance game. Just Dance 3 kick-starts the party with 40+ tracks from multiple genres, popular artist, and top Billboard tracks. Using only the Wii Remote, Just Dance 3 is the perfect dance game for any age or dance ability, so it's easy for anyone to join the movement! With a variety of all-new gameplay modes, tracks that allow up to 4 dancers to uniquely shine, and innovative cardio training options, Just Dance 3 was made to bring the party and keep America dancing!