↓
Home→Music→Oldies→NOW That’s What I Call Music! 30 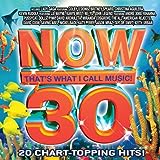 Add to cart
Rating:
Amazon Price: $17.45 (as of March 19, 2020 4:05 pm – Details). Product prices and availability are accurate as of the date/time indicated and are subject to change. Any price and availability information displayed on the Amazon site at the time of purchase will apply to the purchase of this product.

2009 release, the 30th installment in this best-selling series that features the biggest hits by the biggest stars. To date, the Now series has generated sales of over 200 million albums worldwide, and has sold over 72 million copies in the United States since its debut. Every album in the series has reached the Billboard Top 10, and it is the only non-soundtrack, multi-artist collection to reach #1 Billboard status on the Billboard Top 200 Album Sales Chart. Features 20 tracks including cuts from Lady GaGa, Kanye West, Britney Spears, Rihanna, Ne-Yo, The Pussycat Dolls and many others.