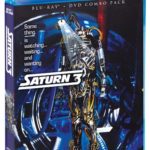 Add to cart
Rating:
Amazon Price: $22.11 $22.11 You save: (%) (as of March 20, 2020 10:04 am – Details). Product prices and availability are accurate as of the date/time indicated and are subject to change. Any price and availability information displayed on the Amazon site at the time of purchase will apply to the purchase of this product.

Adam (Kirk Douglas) and Alex (Farrah Fawcett) are two scientists stationed deep beneath the barren surface of Saturns third moon, Titan. They live together in idyllic isolation in a space-age Eden, seeking new forms of food for an exhausted planet Earth. Their perfect world is interrupted when Benson (Harvey Keitel) arrives as Saturn goes into eclipse and cuts off communication with the rest of the solar system. Aided by his helper robot Hector, James reduces life to one single purpose…survival. The robot becomes violently unmanageable. For Adam and Alex, their only hope is to flee, but the homicidal robot stands in their way. Produced and directed by legendary filmmaker Stanley Donen (Singin In The Rain, Charade and Seven Brides For Seven Brothers), Saturn 3 is a pulse-pounding study in sci-fi suspense! Feel that pulse pound!