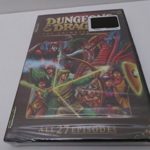 Add to cart
Rating:
Amazon Price: $34.99 (as of March 18, 2020 8:28 am – Details). Product prices and availability are accurate as of the date/time indicated and are subject to change. Any price and availability information displayed on the Amazon site at the time of purchase will apply to the purchase of this product.

An enchanted roller coaster delivers six youth into the magical realm of Dungeons & Dragons. There, each of them gains magical talents and abilities, all the better to survive their time in the Realm. The bow-shooting ranger, the acrobat, the thief, the cavalier, the boy wizard and the barbarian are soon joined by a baby unicorn and tutored by the mysterious and inscrutable Dungeon Master. Opposing them is the evil sorcerer Venger, as well as various ogres, demons, bounty hunters, dragons, lizard men, skeleton warriors and more; all intent on keeping the kids from getting back home!

Dungeons & Dragons was one of CBS's (1983 – 1985) most popular animated series and was later broadcast on NBC (1990), FoxKids (1992), Jetix (2006) and ToonDisney (2006). Featuring the voice talents of Willie Ames (Eight is Enough), Adam Rich (Eight is Enough) Donny Most (Happy Days) and veteran voice actors Frank Welker, Jennifer Darling and Peter Cullen. All 27 episodes from this entertaining series can be found in this exciting DVD set from Mill Creek Entertainment!

Episodes: The Night of No Tomorrow The Eye of the Beholder The Hall of Bones Valley of the Unicorns In Search of the Dungeon Master Beauty and the Bogbeast Prison Without Walls Servant of Evil Quest of the Skeleton Warrior The Garden of Zinn The Box The Lost Children P-R-E-S-T-O Spells Disaster The Girl Who Dreamed Tomorrow The Treasure of Tardos City at the Edge of Midnight The Traitor Day of the Dungeon Master The Last Illusion The Dragon's Graveyard Child of the Stargazer The Dungeon at the Heart of Dawn The Time Lost Odyssey of the 12th Talisman Citadel of Shadow Cave of the Fairy Dragons The Winds of Darkness