↓
Home→DVD's→Movies→Sci Fi→Vintage Sci-Fi Movies, 6 Film Set -The 27th Day, The H-Man, Valley of the Dragons, 12 to the Moon, Battle in Outer Space, Night the World Exploded 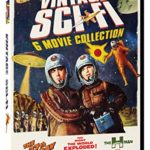 Add to cart
Rating:
Amazon Price: $8.64 $8.64 You save: (%) (as of March 17, 2020 5:36 pm – Details). Product prices and availability are accurate as of the date/time indicated and are subject to change. Any price and availability information displayed on the Amazon site at the time of purchase will apply to the purchase of this product.

An alien give five ordinary people from various countries capsules capable of killing millions of people.Will they use the capsules or will they hold their ground even as they are being hunted down.

The Night the World Exploded

Dr. Conway has perfected a machine which he believes will predict earthquakes, and has determined that one will strike California within 24 hours. They discover there is only 4 weeks to Armageddon. It s a race to save the world.

Singer Chikako Arai s boyfriend has dissappeared. The police begin to hunt for him and discover the radiation from an atomic bomb has turned people into creatures who can kill by touch. They must hurry and catch these creatures to stop the killings.

Twelve to the Moon

An international team embarks on an expedition to the moon in an uncommonly spacious rocketship. There they encounter a faceless alien intelligence who conclude that the human race is too immature and dangerous and must be destroyed.

The nations of the Earth unite in a common cause to fight off an invader from outer space.

Valley of the Dragons

Two men are having a duel with one another when a comet goes past the earth at low altitude and transports them to the moon which is inhabited by savage human beings. They must work together to survive.